Beyond outskirts of gray despair, clusters of identical domiciles and streets the frozen night seemed to have deterred of all life, Kiev slowly materialised in the distance as the taxi crossed over the Dnipro river, inertly floating like oil underneath. The burly cab driver smoked in the car and blasted the radio and drove like you drive when you know a place inside out, one hand on the wheel and the other attending his cigarette. Building by building, church by church, the frost-riddled city towered up outside. The humming of the engine became a slight vibrato as the car rolled over the cobblestones flooring the heart of the city. Feeling the car rattle so familiarly from driving through just about any European small town made Kiev a little bit smaller as well.

Shivers ran down my spine as we drove past Maidan, Kiev’s Independence square. I watched the documentary ”Winter on Fire” on Netflix recently, a 98 minute depiction of the Euromaidan demonstrations in 2013-2014, starting on the very same day, six years ago. A story of peaceful demonstrations turning into full-scale revolution, as the Ukrainian government tried to quash public protests. It took me longer than 98 minutes to watch it. It was one of those evocative documentaries where you have to press pause, sit in some form of thoughtful silence, inhale, exhale, and then continue to watch again. I looked out on the now bare square, echoing empty around the pedestal monument penetrating the night sky. This immense square, every inch filled. Filled throughout an entire winter. Filled with the kind of fateful civil courage someone from my background will never fully understand.

Later, I was at the hotelbar. The bar man held up an empty wineglass against the light and squinted with his eyes, so tiny they almost disappeared into his hard, meaty face. He twisted and studied it meticulously before continuing to wipe it with a linen napkin. Barely had I lifted my hand to wave of his professional attentiveness and to say “Don’t worry about it” when his gaze met mine and a tiny smile materialized at the corner of his mouth. He extended the glass to me by the stem and as if he could sense my restlessness, he said in a matter-of-factly broken English “We has to always make time to make the nice”. I nodded in recognition as I took the glass. It’s somehow always the little things that makes all the difference, we just tend not to notice them. Kiev would be a lot like this.

Gaps between the washed walls outside the window revealed a lilac sky as we rose early the following morning, heading towards the pinnacle of this trip; Chernobyl. A place which seems to be on everyone’s lips lately. I remember when I first learnt of the Chernobyl disaster. I was not old, perhaps 13 or 14, and I remember reading everything I could find about it. I found it so fascinating, so daunting, so unbelievable. Perhaps not so much the accident itself but more so the areas that the accident rendered uninhabitable. Villages and cities, turning into ghost towns more or less over night. It was such a strange feeling to be about to see it all with my own eyes. And perhaps an even stranger feeling when I later did.

The first checkpoint laid some 30 kilometers off the site of the accident. A humble shed of corrugated iron on the crisp countryside. We shuddered in the piercing cold, and the only ones not seemingly demoralised by the sinking quicksilver were the two Jehovas witnesses, task-focused and ready for new-recruits where they stood to the side, bundled up and armed with placards and brochures. After we’d shown our passports, we were allowed inside of the exclusion zone.

A single tiny road shot through the coniferous forest of pines, growing so tightly the outside whizzed by like walls of evergreen. At first, there was nothing but trees. Then came the first derelict houses, almost undetectable in between and behind dead shrubbery, on both sides of the road. First only a few, then a lot more. Tiny boxes in the same colors as the barren surroundings and barns with sunken roofs. People observed and silenced. Almost a reverent silence. But a silence that wasn’t reverent, was the silence outside.

We made stops in a few of the minor villages once home to a Soviet bourgeoisie, and had a walk around. Window frames echoed empty in many of the high-rises, overtaken by vegetation. Bushes growing out go cracks in walls, trees on rooftops. Inside, everything was stripper bare. Wires pulled out of floors, walls and ceilings for copper. Shards of glass shattered across every floor. The only tiny remnants of a previous life once happening here a few strips of tapestry, a single laced curtain. We put down our feet and minded our voice levels as if we had walked into a library. But there was no one to be quiet for.

In Pripyat the never inaugurated ferris wheel stood out against the sky like a steel skeleton, riddled with rust and moss. Pripyat was different to the tiny villages. Possibly because it was easier to picture life there. A Soviet pride erected in the middle of nowhere, sprawling with modernity and now nothing more than an urban graveyard. We walked along avenues encroached to tiny paths by vines, snaking up every tree and snarling up every wall. Stood on the edge of an olympic swimming pool long depleted of water, several tiles missing.

From the rooftop of one of the residential buildings, the containment of reactor 4 in the power plant stood out like a tiny chunk of metal in a vista of pine green. Later, up close, it was so gigantic it could fill a vision of sight. To be standing right in front of it, only separated by a chainlink fence, frlt bizarre. Perhaps because we didn’t really take it seriously. Perhaps, because we did. It’s hard to find words for it. I think the silence of the whole place consumed my words. The only sound coming from the yellow geiger meter going crazy as it came close to the ground, giving off a frantic beeping sound. I grew up in the forest, and I know the plentitude of forest sounds like sing-a-long songs. The creaking of barren branches, the rustle in fallen leaves, the cooing of wood pigeons. This quietude wasn’t the absence of noise, it was the absence of life. I shuddered, and I shudder thinking back of it. I didn’t hear a single bird chirp during the entire day, and that was perhaps the most visceral part of the entire experience.

Coming back to Kiev was like coming back to another world. Stopping for a short moment to feel rays of the morning sun warm our skin in the crisp air, and watch them carry on, glint of the gilded domes and be swallowed by the river, somehow made the whole excursion feel even more surreal. It was as if the simple pleasures and liveliness of the Ukrainian capital made the mere thought of a nearby place so devoid of it unthinkable. I don’t think the Kiev we had time to experience was anything similar to London or New York where you kind of just feel like it’s only you and the city. And perhaps that would deter some. For us I feel like it intrigued us to look a bit closer, and when we did we discovered a different city than the daunting, cold capital it might come off as at first glance.

I think of the gay club we tracked down to go dancing. A venue which from the outside looked nothing less than a place where mafia settlements would take place, being an unlit office building behind a dark parking lot. First we wondered if we had the right address, then we saw the little entrance sign saying that ladies had to pay double to get it.m. On the inside it was as filled with the same love and acceptance you’d expect in a similar place but in another, perhaps more accepting corner of the world, and that made it special, and important. You can be anywhere and literally just cross over a simple threshold and enter into a different world, and the reminder that love always finds a way had me feeling the sun on my face one more time.

It is almost always people that make the difference. Which is a shame for someone like me who’s normally prefer the whole me-and-the-city setup. But I would have to admit that I miss out sometimes. The people that crossed our paths here made me think of that. Probably because they had a sincere genuineness about them. In taxis, restaurants, bars, supermarkets. An attentiveness to eye contact, listening and above all, an eager to be of service. I believe this is precisely why Kiev had the air of being a lot smaller than it is. Because that kind of thoughtfulness is more rare in truly big cities, as if people’s attention is alway needed elsewhere.

Ukraine, I might have to come back for more. 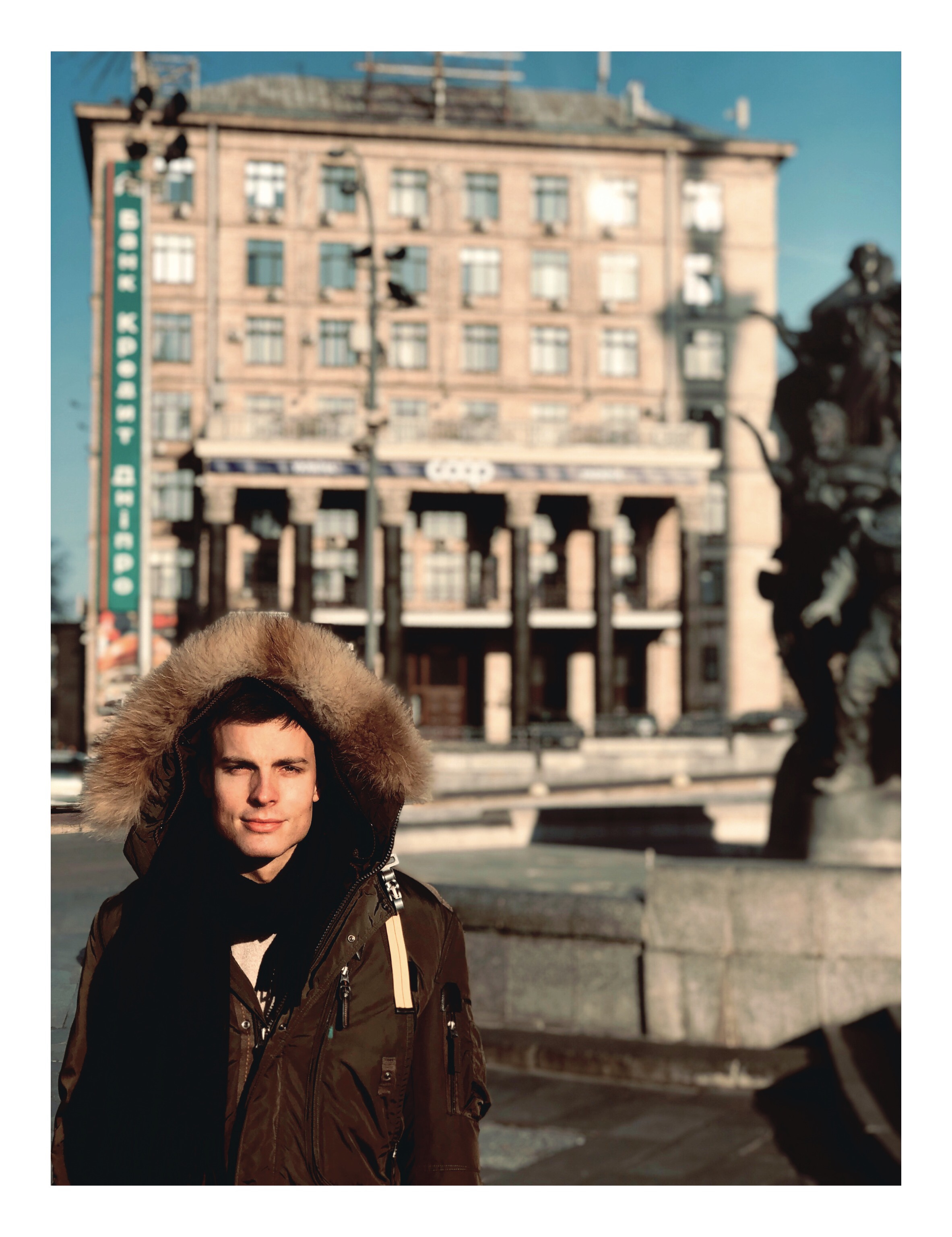 A blog and a diary. Thought, reflections and observations from traveling, through mindsets and countries, with not much more than a passport and an aspiration to always have an open mind, by a Swedish guy.